I often look at foods and wonder, “Who’s idea was it to eat this?” Some foods just don’t look like they should be food, including huitlacoche. Corn with huitlacoche growing on the kernals.
Huitlacoche is corn smut — a fungus that often infects sweet corn during times of drought. It enters the plant through the ovaries, and replaces the corn kernels with large tumor-like spores that look like really ugly mushrooms. Farmers in the U.S. have spent millions of dollars trying to eradicate the infection. The UC Davis Student Farm has a bad case of corn smut this year, and it’s threatening to ruin their entire crop.

But it may not be such a bad thing. Often known as the Mexican truffle, huitlacoche is considered a delicacy in Mexico. In fact, the Aztecs used to purposely scratch their corn plant with a knife to encourage the growth of huitlacoche.

According to this article in the Huffington Post, huitlacoche may actually be more nutritious than the corn it infected. It’s full of protein, minerals, and other nutritious compounds that don’t always exist in the corn itself. It’s also more valuable than the corn itself — in a study conducted by University of Wisconsin, an ear of huitlacoche sold for approximately $1.20 and cost about 41 cents to produce. An ear of corn without the infection cost less than 10 cents to produce, but sold for only a few cents more.

Huitlacoche is typically found in tacos, quesadillas, tamales, and other traditional Mexican cuisine. In the U.S., it’s mostly found canned in Mexican grocery stores, and can occasionally be found in high-end restaurants or traditional Mexican restaurants. Want to give it a try? For suggestions of restaurants that serve the delicacy in the San Francisco Bay Area, read this blog at chowhound.com.  Or if you’re really brave and want to cook it yourself, try including it as a side dish or making huitlacoche soup. Corn field UCD Student Farm
I was out at the UC Davis Student Farm this weekend looking for huitlacoche, and sure enough, about one in every 10 ears of corn had it. Though it could be profitable, the student farm has no intention of selling it this time around.

“We just don’t have the resources to harvest it, and we don’t have the market here to make it profitable” said Edwina King, the Market Garden Coordinator at the UCD Student Farm.

But that won’t stop some locals from getting excited about the crop. Jessica Myles, a UC Davis graduate student who helped me identify the fungus at the student farm, harvested some herself.

“I’m going to go home and cook it up and freeze it, I’m so excited!”

She’s promised to make me huitlacoche tamales. As curious as I am about trying it, I may have to close my eyes while I eat it. Stay tuned.

A new federal voucher that gives low-income women access to a range of fruits and vegetables could provide unique new marketing opportunities for California growers.

In 2009, the federal Special Supplemental Nutrition Program for Women, Infants and Children (WIC) began distributing monthly cash vouchers to low-income women with children to buy fruits and vegetables. The program reaches almost half of the infants and one-quarter of children under 5 years old in the United States.

A team of UC Cooperative Extension (UCCE) researchers and nutrition advisors has been exploring the possibility of developing a farm-to-WIC program that would link these low-income consumers with local growers. The purpose of such a program would be to increase the consumption of a wide variety of fresh produce, with a focus on locally grown produce when available.

UCCE conducted a survey of produce preferences and buying habits among WIC participants in Tulare, Alameda and Riverside counties in 2010. The full study is published in the January-March 2012 issue of California Agriculture journal.

Based on the results, the UCCE team developed a list of 19 produce items to promote in a possible new farm-to-WIC program. They are:

Although mustard greens and collards were not popular across all sites, the advisors gauged a potential market in Alameda County, so these were retained. Based on write-in responses, oranges were also added.

In California, which has the nation's largest WIC program, 82 local agencies serve about 1.43 million participants at 623 local centers, and WIC participants can redeem their monthly vouchers at 4,000 grocery stores statewide. About 40 percent shop at WIC-only stores, which stock and sell only WIC-authorized foods.

Stocking produce is relatively new to WIC-only stores; before rollout of new WIC food packages in October 2009, these stores were only required to stock limited amounts of fresh carrots. In the survey, most WIC participants (58 percent to 72.3 percent) responded that their preferred stores offered many choices, but fewer participants (18.5 percent to 41 percent) rated the produce quality as “excellent.” Key factors determining purchase decisions were produce quality and freshness, and nutrient value (vitamins and minerals). Cost was relatively less important, possibly because WIC participants procure the produce with the vouchers.

The list has served as a starting point for discussions with growers and WIC vendors.

“The survey showed that WIC participants were interested in purchasing fresh produce with better quality and more variety,” wrote lead author Lucia L. Kaiser, Cooperative Extension specialist in the UC Davis Department of Nutrition, and co-authors, in California Agriculture. “Some WIC participants that we surveyed said they avoided shopping at WIC-only stores in part because these interests were not met.” 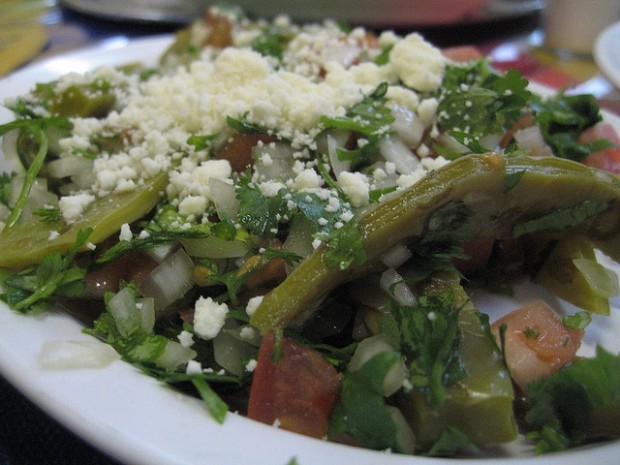 A dish made with nopales (cactus pads).